ASK the engineers any questions you have about engineering.

CHAT with the engineers in a 30 minute long text chat booked by your teacher.

VOTE for your favourite engineer to win a £500 prize to spend on communicating more engineering. 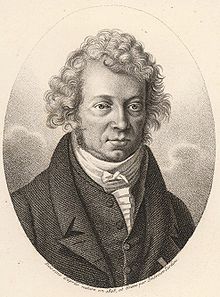 André-Marie Ampère, from whom ampere takes its name, in 1825 [Image source: Wikipedia].

An ampere is a unit of electric current. It is named after André-Marie Ampère, who was a French mathematician and physicist. He is known for his contributions to classical electrodynamics, which is a field studying the interactions between currents and electric charges.

We power a large amount of devices with electricity. Professionals working with electricity, e.g. electrical engineers, use lots of different units of measurements. On top of amperes they might work with coulombs or ohms.

This is a general engineering zone with six engineers from different backgrounds. One makes the water flushed from toilets drinkable, one builds wind farms in Africa and one studies how to create new smart and flexible wings for airplanes. One 3D prints spaceships, satellites and armoured fighting vehicles out of metal, one manages distance learning programmes, and another designs systems that drive trains automatically.